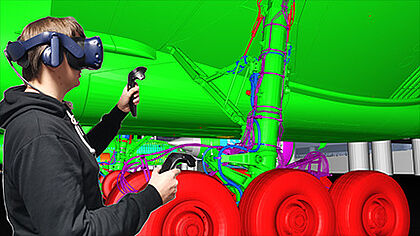 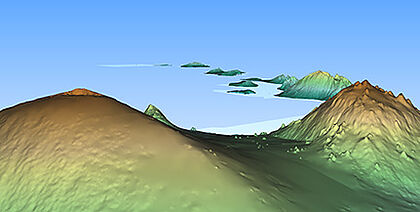 UltraViewXP/VR rendering technology has been integrated in Interviews3D Composer 2020, which increases the render performance by a factor of 10 or more on modern graphics hardware. UltraViewXP and UltraViewVR are based on the dual render engine of VGR 4.0, that was released one month earlier. This way, legacy graphics hardware is still supported for older desktop PCs, tablet and laptops, whereas the potential of modern GPUs can be fully exploited by the same software. UltraviewVR yields consistently high frame rates (90 fps or higher) for head-mounted displays and power walls for even the largest CAD models or point clouds with tens of billions of graphics primitives.

Additional functionalities of version 2020:
A new material system, which allows photo realistic representation of surfaces. For this purpose, materials defined with the material design language MDL can be imported from corresponding libraries. The measuring tool has been extended to now also measure angles and path lengths. New extended display modes let the user vary the point size in point clouds, or choose the representation of geometries as wire frame models. Digital elevation models from geo information systems (GeoTiff) can now be imported as three-dimensional meshes. Viewpoints may be shown in 3D windows together the scene geometry.

The Plugin API of Interviews3D 2020 Composerhas been extended significantly. Among other, the user can now import CAD source files into VGR databases via the API. Currently the Power Wall and Head-Mounted Display Extensions to Interviews3D, and the Edddison Interface have already been realized as plug-ins using this API. The API enables end users to extend Interviews3D Composer with new functionality without the necessity of a separate developer license or SDK

The Interviews3D Head-Mounted Display / HMD plug-in is an extension module to Interviews3D Composer 2020, that enables immersive navigation and interaction at high frame rates of 90 fps or more, even for the most massive CAD models or point clouds consisting of tens of Billions graphic primitives.  New functions for intuitive immersive navigation, positioning parts and assemblies and measuring are now supported. The interaction with hand controllers supports a wide range of HMD products (tested with HTC Vive and Vive PRO, Oculus Rift, Windows Mixed Reality Devices).

The Interviews3D Power Wall plug-in is an extension module to Interviews3D Composer, employing a networked client / server architecture. The clients use the UtraViewVR render engine for high performance rendering, unaffected by the Master Control render capacity. This way, the navigation can be controlled remotely from a laptop or tablet, e.g. for design review sessions, and at the same time by the immersive user wearing tracked stereo glasses, using a fly stick, or space mouse. Multiple projection "walls" can be combined to multi-sided Caves. Rendering of each wall can be carried out on the same PC with one or multiple GPUs or on separate PCs, connected as a networked cluster, synchronizing displays and data. This way the best performance and image quality can be obtained in a cost-effective and flexible manner.